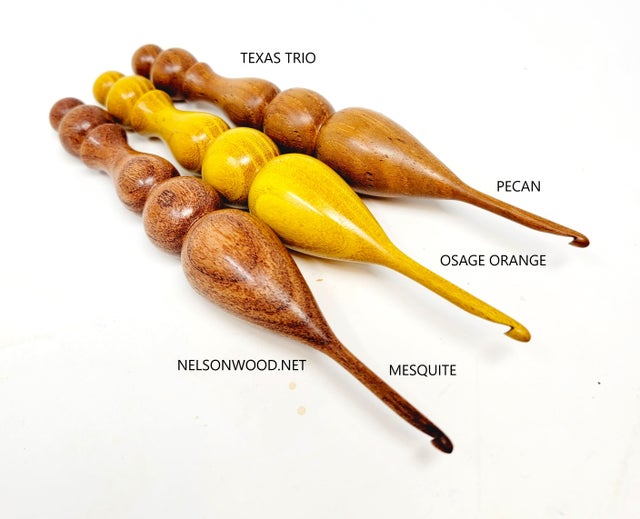 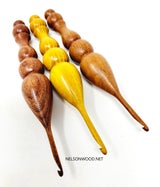 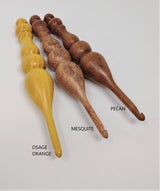 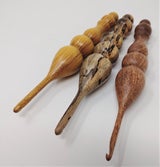 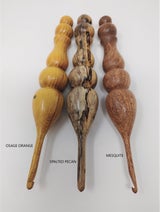 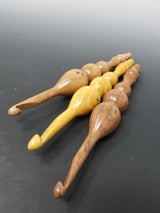 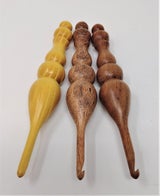 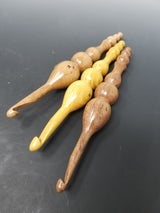 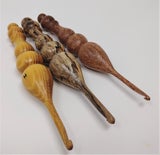 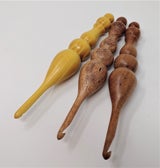 These beautiful hand turned crochet hooks are made from Texas Trees. You will receive one of each wood, Pecan, Osage Orange and Mesquite. It's shaped with a larger handle to relieve stress on the hand and wrist when crocheting. The hook has an Ergonomic shape that fits nicely in the hand.

Add to Cart
Pecan , Carya illinoinensis or illinoensis, is a species of hickory, native to south-central North America, in Mexico from Coahuila south to Jalisco and Veracruz, in the United States from southern Iowa, Illinois and Indiana east to western Kentucky, North Carolina, South Carolina and western Tennessee, south through Georgia, Alabama, Mississippi, Louisiana, Texas, Oklahoma, Arkansas and Florida, and west into New Mexico.
"Pecan" is from an Algonquian word, meaning a nut requiring a stone to crack.

Mesquite is native to many parts of Texas and the southern United States. It has for many years been considered to be a nuisance to farmers and ranchers and only in the past few decades has the mesquite flooring industry begun to evolve. Texas A&M at Kingsville has studied mesquite in the past and has published information about the mesquite tree and its wood and working properties.

The most attractive feature of mesquite wood is its dimensional stability and hardness. From wet to dry mesquite loses less than 5% total of its volume while other woods can lose in excess of 15%. This means a mesquite floor is much less likely to move during extreme weather changes. Mesquite is harder than red oak and is much more stable.

Mesquite trees do not grow like pines or oak trees. They are often a twisted and gnarled tree with many bends. Straight lengths of 2 to 3 feet are common with longer pieces available but with less quantity.

Mesquite milling from log to lumber or flooring is a labor intensive process. Because of its short lengths much machinery that is used in the logging and milling industry in the northern states, will not work with short mesquite logs. In addition some of the cracks can be so wide that it renders some of the lumber useless and can only be used for BBQ wood.

The thorny jewel of the American Southwest In the eyes of Native Americans, the mesquite tree of the Southwest represented both shade and sustenance. The tree's sugar-rich bean pods fur nished food and drink. Its sap became black dye, gum, and medicine. And sewing needles were made from its sharp thorns. The tribes relied on mesquite wood, too, for fuel, arrows, lodge frames, and even plowshares. Later, pioneer hands worked mesquite into timbers, railroad ties, fence posts, wagon wheels, and sturdy rustic furniture. In the late 1800s, citizens of San Antonio paved the streets leading to their Texas shrine, the Alamo, with mesquite slabs. In testament to mesquite's durability, remnants of the wood still surface from the activity of street maintenance. While most 20th-century craftsmen equate mesquite with only the barbecue grill, bands of aficionados promote the wood as furniture-class stock. Their efforts have lifted the wood's reputation out of its native land.

Osage Orange - Maclura pomifera - also know as Hedge, Hedge Apple and Bodark. Osage Orange trees are a common sight on the Great Plains today although they were not a widespread member of the prairie community originally. Found primarily in a limited area centered on the Red River valley in southern Oklahoma and northern Texas, they were planted as living fences - or hedges - along the boundaries of farms, and have spread widely from these restricted, linear beginnings.
The trees are easily recognized by their glossy, lance-shaped leaves and their short, stout thorns.
The name of the tree comes from the Osage tribe, which lived near the home range of the tree, and the aroma of the fruit after it is ripe. (Find one of the fruit that has been sitting in the sun on a balmy Indian Summer day and notice the pleasant, orange-peel smell of the skin.) Not all of the trees will have fruit because Osage Orange are either male or female, and only the females will bear fruit.
I get all my Osage Orange from right here in the North Texas. This is a beautiful wood. But like a lot of thing beautiful it has an ugly side. This wood is very hard, it dulls tools and can be very brittle. In larger tree just the wind blowing through it can cause "wind checking" which cause cracks in the inside of the tree. But all thing aside I always find great treasure inside Osage Orange.